It’s not just fish and chips. Or vindaloo with a tall mug of lager at a pub down the road. And though I would never turn my nose up at warm Cornish pasty sold from bright little kiosks at major subway stations, I am in search of something more complex. Returning to London after more than six years, I am curious about how the city and its quicksilver food scene have changed. I have just one week. So much to eat, so little time. Still, I do my best.

Ironically, my search for hip British cooking leads to young Scottish chef Adam Handling, known for his technique and fascination with Asian flavours. He plates up — hold your breath — a lunch of fish and chips. Although his version stays true to the essence and spirit of the old fashioned classic, he adds simple but clever tweaks. Diners choose between Scottish salmon, Gigha halibut and Atlantic langoustines. The fish is light and flaky, with a crisp golden crust, and is accompanied by deliciously uneven fries, generously seasoned with garlic and parsley. Handling is best known for his stint on MasterChef: The Professionals in 2013. The following year, he was named British Culinary Federation Chef of the Year. Now, aged 26, he runs Adam Handling at Caxton, a restaurant at the grand old St. Ermin’s hotel. His starters include a buttery liver pate teamed with warm bread that’s served in a quirky chef’s cap. Dessert is a yuzu meringue so pretty, it could hang at Tate Modern. It’s a creative tizzy of bold colours and bright flavours: milk ice cream, set off by tart yuzu lemon curd surrounded by puffs of caramelised meringue.

Cupcakes forever: It’s small, it’s fun and it’s slathered with icing. What’s not to love? Like the Little Black Dress, cupcakes just never seem to go out of style. I see them on sale everywhere, from trendy flea markets to train stations. But it’s at Hummingbird bakery in Notting Hill that I finally cave in and order one. I’m at Portobello market to browse through antiques, but its freezing, and the deliciously pink café looks invitingly warm. Made with free-range eggs and no preservatives, their cupcakes sit pretty in a colourful row. After five minutes of soul-wrenching indecision, I finally choose pumpkin chai over the pink champagne, red velvet and dark chocolate cupcakes. It’s soft and fluffy, but also surprisingly easy to shop with, even if I did get some icing on a set of 1940 crystal decanters.

Beyond shawarmas: Last time I was in London, Edgware road was the epicentre for Middle Eastern food: creamy pots of hummus, smoky kebabs and fluffy pita bread. At night, the road would be suffused with fragrant hookah smoke, curling its way over diners who spilled onto the sidewalks. This time, a gastronome friend suggests we expand our horizons and so we head to Antepliler, which specialises in Anatolian cooking. The food is fascinatingly unfamiliar. We eat Lahmacun, thin circles of dough topped with minced meat, vegetables and herbs, and then baked. There’s pide, which looks like the result of a love affair between a pizza and a naan. It’s filled with diced lamb, chicken, feta or halloumi. The star of the evening, however, is the Ali Nazik, featuring subtly spiced sautéed lamb served on a bed of baked aubergine, with lashings of thick, garlicky yoghurt. We finish with sweet dark Turkish tea.

Uncovering Camden: The Global Kitchen at Camden Lock serves everything from toasties to gourmet Mac & Cheese. We pass by Ethiopian, Jamaican and Spanish paella stalls, only to settle for the less adventurous, but still immensely satisfying, tiny Dutch pancakes slathered with warm Nutella. I also make a note to eat at the popular Shaka Zulu, which is in the same area, next time. London’s largest South African restaurant, it opened in 2010 with a special royal blessing from the Zulu King, HRH Goodwill Zwelithini. It specialises in game meats such as kudu, ostrich, springbok and zebra from Namibia. Though admittedly, the thought of a zebra steak is rather disconcerting. As silly as it sounds, a part of me keeps expecting it to be striped.

Creepy superfoods: At a gourmet store in stylish Shoreditch, I’m not surprised to see three shelves dedicated to everything from routine cold-pressed coconut oil, to coconut sugar. I do, however, do a double take when I find a bag of roasted grasshoppers. The sign above it announces ‘Grub’s Edible Insects’ and explains that they are a “healthy and super-sustainable protein source.” If you’re not brave enough to crunch through bowls of salted worms, try the other big trend of the year: bee pollen. A suitably mysterious superfood, it’s apparently considered to be one of nature’s most completely nourishing foods.

Eat beautiful: Eating clean is so easy in London. I’m not even tempted to grab a burger, candy bar or bag of chips thanks to the many inventive options available on every road. At Itsu, with its encouraging ‘Eat Beautiful’ slogan, there’s a new rice ‘potsu’ – but it sounds too fiercely righteous (roast vegetable, baby spinach, green leek, red rice) so I settle on salmon sushi. The salmon and avocado maki rolls are neat and satisfying. Better still, the menu tells me they total up to just 256 calories. In a fit of virtue, I add a pot of edamame to the meal, and mentally pat myself on the back all through lunch.

Later in the week, a friend takes me to Ping Pong, where we eat baskets of fluffy steamed char siu buns stuffed with honey- barbecued pork. We also try tender pork chops, with parcels of vegetables and sticky rice meticulously wrapped in leaves; it’s both stylish and healthy. Well, except for the fact that we OD on cocktails. In our defence, they’re delectably intricate: the winter berry blazer alone has seasonal berries, cognac, absinthe and cassis liqueur, all flamed and partnered with strawberry tea. Finally, I’m fascinated by Square Pie at bustling Spitalfields Market, which offers a ‘Skinny Pie’ without the base. I order one, juicy with steak that’s been braised with carrots, leeks, onion and a decent hit of Guinness. It’s straight out of the oven, and doused in gravy. I team it with a feisty local Camden Hells lager, because, well, I’m on holiday. And remember, I did order Skinny Pie.

Please Porridge Hot: I develop an unexpected fondness for porridge, thanks to the friend I’m staying with, who cooks up a luxurious concoction every morning with almond milk and then tops it with nuts, cranberries and coconut flakes. Apparently, I’m not the only one. It’s still cold, and a large number of cafes advertise bowls of porridge. The oaty hot spot, however, seems to be the new porridge café at Shoreditch. They serve a different menu of about six versions every day. This is certainly not your grandma’s porridge. Think baked apple, raisin and cinnamon with grain-rolled oats. Alternatives include grain rye, buckwheat and spelt. If you prefer savoury porridge, there’s a version with salami, pecorino and porcini mushroom. And for weekends? Settle down with a large bowl of dark chocolate, raspberry and lime porridge made with coconut milk, and topped with hazelnuts.

And then there’s Indian: 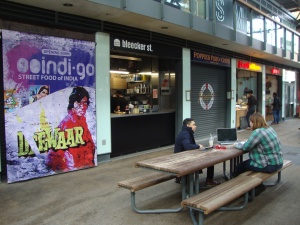 Of course, curry in London is an old story, as are the fancy new Indian restaurants that are plating up primped and styled versions of Indian food. But the Indian restaurant that everyone seems to be talking about now is Dishoom, which calls itself ‘A Bombay café in London’. Created as homage to the old Irani cafes of Mumbai, it offers Parsi classics including eggs akuri and bun maska. They even have an Irani café-inspired berry pulao made with cranberries. And for the homesick Indian, there’s rajma chawal. Interestingly, the café’s made the crossover from desi cliche to smart global, drawing locals and expats alike. Probably thanks to its smart format and gentle fusion, such as the bacon naan roll, which you can eat with Bailey’s cutting chai. Bailey’s chai? Now there’s an idea to take home.

Posted by shocase in Uncategorized