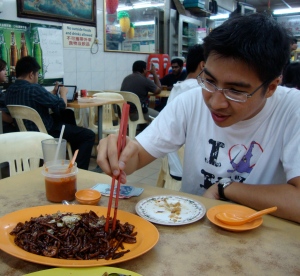 Terence working his way through a plate of Hokkien mee

I kissed a snail. And not in that metaphorical ‘someday my Prince will come’ sense. I mean an honest-to-goodness crustacean (or would that be mollusk?) from a plate of stir fried spicy sea snails.

I blame Terence entirely. He made it look so easy. “Just scoop up a shell with sauce, and suck,” he says, languidly working his way through the first few. “We call them chut, chuts,” because that’s the noise you make when you eat them,” he laughs. Later, I’m told “chut chutting” also means ‘kissing a snail’ in Cantonese. They taste musky, of dark water and deep fish tanks. The sauce is thin and fiery, a clever foil to their chewy heaviness.

This adventure begins at the Taman Paramount railway station, in Petaling Jaya, a Malaysian city adjoining Kuala Lumpur. We’re meeting Terence, who is the co-founder of ‘Food Tour Malaysia’, (http://www.foodtourmalaysia.com/) which focuses on guiding tourists through the country’s intimidatingly diverse cuisine. And I’m keen on exploring a world beyond gleaming food courts set in shopping malls, where I’ve been eating little besides Char Kway teow, sweet Kaya toast and steaming teh tarik, ever since I landed in Kuala Lumpur.

As we walk to Terence’s car, he explains why we’re in the more prosaic Petaling Jaya instead of glitzy Kuala Lumpur. “Most people work in Kuala Lumpur, and live here. So it has a much more local flavour… The restaurants are home grown and passed down from generation to generation. Recipes are guarded.” He adds thoughtfully, “Chinese cooks are like Kung Fu masters. If there are 10 secrets they will only tell you eight.”

We begin at his favourite Malaysian hawker centre. It’s dinnertime, and customers relax over sentimental soap operas on television while chatting with the cooks over dinner. As I watch a bowl of cockles breathe heavily, Terence gestures to a stall owner and he brings us a handful of warm banana leaf packets, held together with toothpicks.

“Otak Otak,” says Terence, explaining how the stingray is marinated, wrapped in banana leaves and then grilled. It’s spicy, with sharp definite flavours: kaffir lime, red chillies and smoky charcoal. We’re given small blue bowls of aromatic lamb stew next, tasting of coriander, pepper and golden fried onions. Of course no Malaysian meal is complete without nasi lemak, rice cooked in coconut milk and served with crisp anchovies, peanuts, a boiled egg and generous dollop of spicy sambal that stains the rice red.

The next stop is the rambunctiously energetic Chinese Restaurant Ahwa, known for using coal fires to give their food an unmistakable edge.

There are cheerful yellow-orange paper lamps dancing between ceiling fans like pineapples on parade. We begin with tall glasses of cool barley water, and refreshingly tangy lemonade spiked with dried sour plums.

Terence orders vegetarian Popiah rolls, rice crepes stuffed with shredded jicama, a Mexican Turnip, stir fried so its unusual nutty flavour and juiciness is a contrast to the crisp cucumber and bean sprouts, all topped with a thick sweet bean sauce. There’s also a plate of boiled squid, curling at the edges, tossed with spinach and covered with big handful of crushed peanuts. We also eat Kwao Teo in a glistening glutinous sauce, embedded with coral prawns. And chicken satay served with an addictively sweet-salty peanut sauce, spiked with galangal. The snails make their appearance at this stage. They’re followed by another challenging dish-fried Hokkien mee, thick noodles blackened with rich soy sauce, and cooked in pork lard. It’s a cult dish is Kuala Lumpur, and Terence’s infectious enthusiasm — the same reason I’m a crustacean’s kissing cousin — inspires me to try a few bites. Let’s just say I expanded my horizons, and then went back to eating satay.

Dessert is at a bustling night market, alive with chatter and randomly placed tube lights. We head to a Chinese sweet soup stall, featuring massive bowls from which you serve yourself. We try sweet red bean, mung bean and peanut soup, sitting on unstable plastic chairs and soaking up the sense of community.

“Indian?” asks Terence. It seems like the ideal way to end the night.

I chat with the store-owner in Tamil. “What’s he saying?” asks Terence, curiously. I plot my revenge. The joys of turning tables on a local when you’re abroad!

Posted by shocase in The Reluctant Gourmet, Travel